It has been an ongoing process with the #MinsGame. Truly it has sucked big time?! I have spent a lot of time going though stuff, to keep and what not to keep, and stuff I don’t use. I have gained a bit of money back that I have put into acquiring it in the first place. Some I have got more back than I paid, and others I have received pennies on the dollar I spent. That is the only part that really does suck. And we all go through that, right? The question is to what degree of intensity. On the positive side of life so far with my journey with less stuff, I have successfully hit the 9 month mark of doing http://www.theminimalists.com/game/ the #MinsGame. I have been a culling madman, yes I have culled stuff like crazy. A total of 4340 big, little, cheap, expensive items from the pile of stuff.

Where did it all go? Most went to donations, Goodwill in the local Minneapolis area. Other stuff worth value went to local Re-Use store named http://www.newuses.com/ New Uses. Sold some stuff on Craigslist. I was very grateful that they bought what they could, it helped offset the money lose from being a “tiny hoarder”. My main goal was I just could not just trash what I believed had value. Even items with small value was important to me, and try to give it a new home.

I meet Joshua & Ryan back on July 20th, yeah I know what took me so long to do this post. No excuses, just culling like a crazy man. It was great to meet them in person when there were in the Minneapolis Saint Paul area for their book tour Everything that Remains. Great going guys !!

The past 9 months really have gone by so quickly. It has been daily and weekly tasks of going through storage bins, box’s, bags, and shelves. I really could not have stayed with the goal without being on two Google+ Communities; Tiny Transition and Downsizing E-Course, and Downsizing Support Group. It is just fantastic to be connected with like minded people on the same interest and journey. To many people to thank, however I need to thank Mariah Coz! Thank you so much for helping me to become more mindful of simplicity. The best way to organize is to get rid of the crap. Yeah!! In the past I built shelves and bought storage bins, so It is a big difference now. I am keeping everything that remains that I use, need, and love!!

Wishing you all well! The best is yet to come! ~Troy 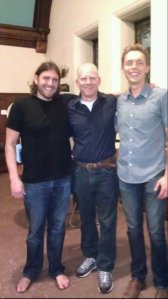